Awards & Credits
I first began playing percussion in my hometown of Riverdale, GA, at the age of ten, when I joined the elementary band program and my dad purchased my very first drum, a Ludwig snare for school. I found myself drawn to percussion because I found myself continuously creating rhythms and beats.

I began to steadily progress and, in the fifth grade, was enrolled in private lessons with Bill Gowan, the house drummer at the Hyatt Regency in Atlanta, GA. He performed with many stars that passed through the city during the golden age of Atlanta live music, people like Frank Sinatra, Bob Hope, Sammy Davis Junior, and others. Studying with him exposed me to the raw power of rhythm and the sounds percussion instruments provide to give life to music.

By 7th grade I was selected for Riverdale Middle’s pep band where I played music by bands like the Beatles and found an ear for rock. Later that year, I transferred to Mundy’s Mill Junior high to participate in their exceptional band program. I then matriculated into Jonesboro High School, which was known for its superior marching and Symphonic band program at the time.

During that summer of 1976, while still in junior high school, Mr. Attina of Attina’s Music Store in Forest Park organized a Bicentennial Symphony with several notable musicians. I was honored and humbled when he asked me to play timpani for the performance. Mr. Attina also put together some talented high school musicians and included me to play drumset. The group was for a performance at a street dance on the Bicentennial Fourth of July that summer. The other students were high school seniors and drove convertibles and hot rods and had groupies hanging around. I was in 8th grade and worked hard and serious to play at their level. We played all the popular songs they listened to that I had not been exposed to yet. They told me how the songs went and what to play and I put it together. We practiced for hours leading up to that night. I got blisters and wrapped my hands in electrical tape and kept playing. The entire experience and energy of performing was very exciting. That was my introduction into professional playing.

Throughout middle and high school, I participated in District Honor Band, All-State Orchestra, Solo & Ensemble, and played snare all three years of high school. During 8th grade, I simultaneously began studying under Jack Bell, the Principal Percussionist of the Atlanta Symphony Orchestra and head of the Georgia State University Percussion Department. Thanks to those lessons, timpani and mallets became a significant additional part of my percussion skillset. All my playing paid off when I was offered a full scholarship in Percussion Performance at Georgia State University.

Over my career I have worked as a freelance and studio session drummer in Atlanta, performing with countless groups in various venues across a wide variety of genres. I have taught private lessons, percussion clinics, and drumlines at middle schools and high schools throughout Georgia between 1981 and 1992.

I then took a 21-year break from teaching to raise two children and pursue several business interests I had, still in the music industry. I restarted lessons and sectionals in 2012 at JC Booth and White Water Middle Schools and am still going strong with students from many schools taking lessons.
I made the investment to open a private percussion studio in 2019 as part of “The Stage Academy of Performing Arts”. I have a grand marimba, two timpani, electronic drum set and several snare drums and pads in my dedicated space there as well as an ensemble room for large group rehearsals with two additional electric drum kits and a PA.
I fully invest in my students and care strongly about the percussion craft and helping instill an appreciation and knowledge of music in individuals of all ages.
Schools Taught By Year 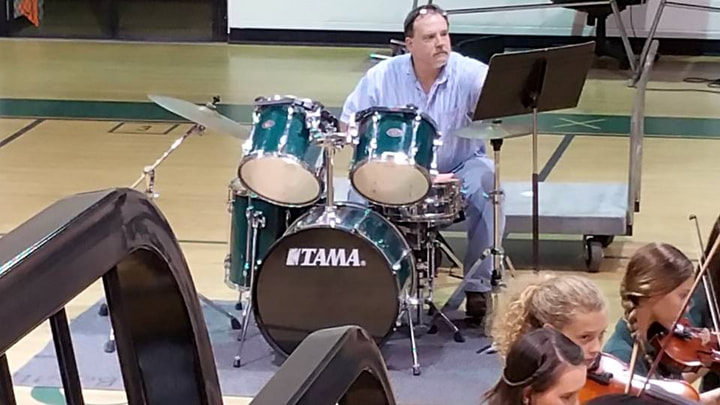